NKN testnet v0.5 Koala is officially released today , marking the completion of another key milestone on our roadmap. Since the v0.3 Lemur release two months ago, NKN development team have made the following major achievements:

At the same time, the community developers have become much more active and are playing an increasingly important role . They have created a large number of high quality contributions: ranging from dashboards, wallet, blockchain explorer, applications, clients in several programming language, to technical documentation and tutorials. This means that NKN is firmly marching towards true decentralization and is one big step closer to the mainnet release in the first half of next year.

First of all, from the number of pull request and commits of NKN Github code repository, the main efforts have been focused on 5 repositories: nkn, nnet, nkn-client-js, nkn-wallet-js, and nkn-mining over the past two months.

During these short 2 months, there were 18 sub-releases which illustrates the tremendous and fast paced effort by the core development team.

NKN open sourced nnet : a fast, scalable, and easy-to-use p2p network stack . This is one of the four core components of NKN , now modularized and released as a separate top level repository. Written in Go, nnet will enable developers to build new p2p networks and connected applications using the next generation of decentralized infrastructure. For more details please see the github,:

Don’t forget to leave your star if you like it.

To facilitate the community to participate in the NKN testnet and carry out experimental mining , the front-end team developed and released the GUI miner. A detailed mining guide has been released accordingly, which will help more community members participate in experimental mining that will further assist the development team to discover problems exposed in a large-scale testnet.

Contribute to nknorg/nkn-mining development by creating an account on GitHub.

In addition, public testnet monitoring dashboard has been implemented: 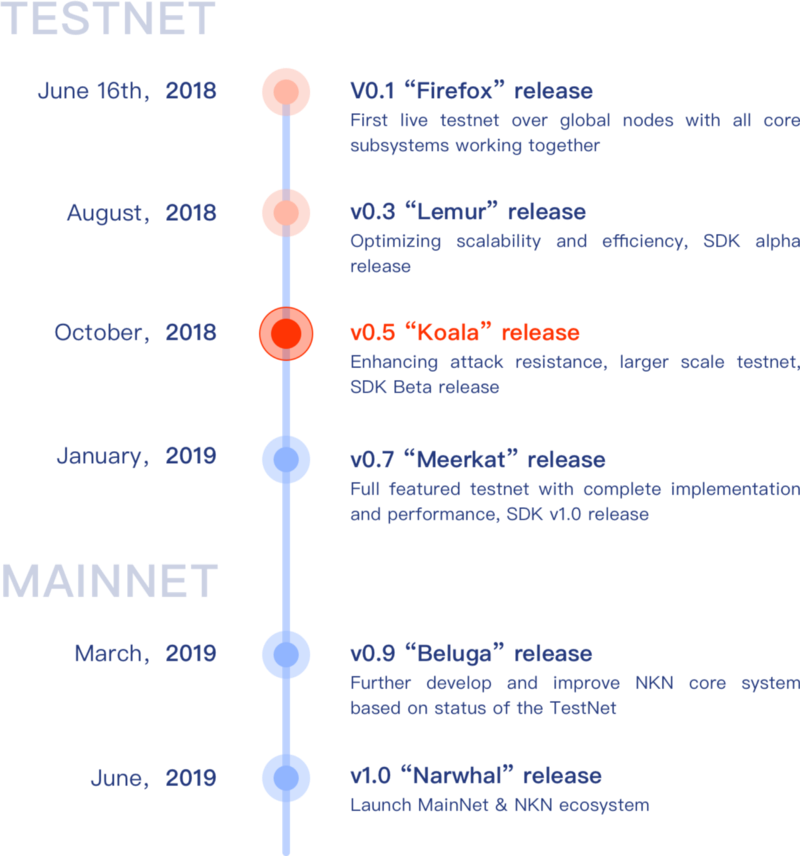 The V0.5 Koala release of the NKN testnet also kick-started the journey towards the v0.7 Meerkat release due January 31, 2019 . This will be the final full-featured NKN testnet to achieve complete implementation and performance before transitioning to our mainnet development.

Looking ahead to the Meerkat milestone, the technology focus is to introduce a full-featured NKN testnet that includes fault tolerance, data transmission and routing, relay certification, and a fully implemented consensus algorithm. This consensus algorithm enables fast convergence in large-scale networks. In addition, NKN SDK 1.0 version will be released to accelerate the application development on top of NKN.

We invite all developers to join our flourishing technical community on our Discord channel and GitHub repoitory:

NKN testnet v0.5 version Koala is NOT compatible with the previous v0.3 version of Lemur. We request that you update the software to v0.5 before joining the NKN testnet. For detailed instructions and links please follow our pinned message in Discord testnet channel.

We want to stress that the incompatibility of the software version will NOT affect the previous mining record or your wallet balance of test tokens. But to be extra safe, please make a backup copy of your wallet.dat and password before updating the software.

We plan to hold an online AMA event on Telegram during early November and release a more detailed guidance document of the NKN testnet experimental mining incentive policy. Please subscribe to our official news channel and stay tuned for the latest news!