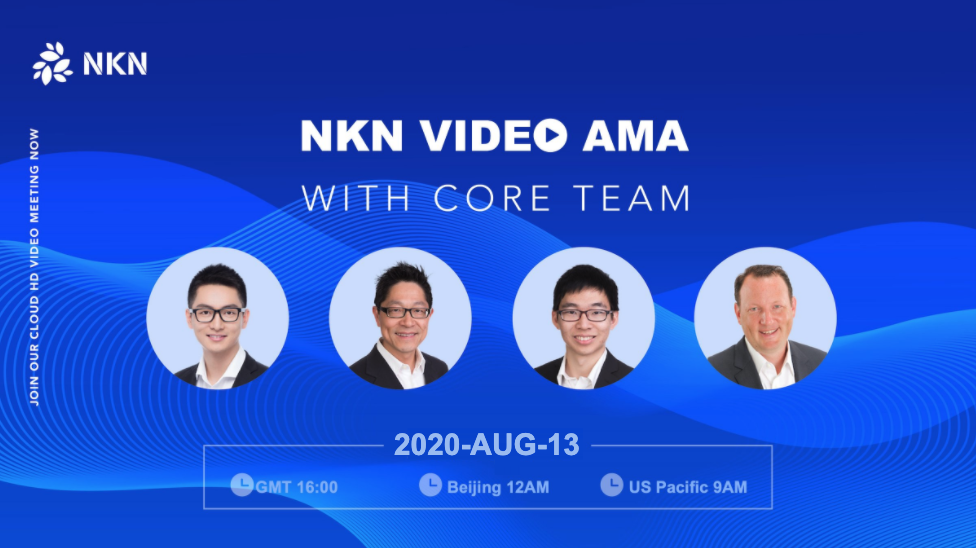 Please ask your questions here as well as live online.

Are there any updates on the partnership with iQIYI? When to expect their first use of nkn network and token?

Are there any negotiations with american companies on the use of nkn CDN?

Could you expand a little on the pCDN model that is operating in china at the moment, from hearsay I have gathered that operating such a node is many times over more profitable than running a consensus node, while not providing any security or consensus benefits to the nkn blockchain.

To me it feels like a select group of chinese miners are currently making profits over the backs of the “westerner” miners which secure the network for little to no reward.

Commercial node operators / chinese iqiyi edge nodes / pCDN miners do not contribute to the blockchain but profit off of others securing and maintaining the network, I suggest a minimum NKN lockup amount for those non-miner nodes so that they too contribute to a healthy and fair ecosystem.

We’ve spoken about the NKN website and visuals for a long time, and recently it’s sounded as if it’s getting higher and higher on the the list to complete. Do you have any timescales for this to be properly targeted?

It’s becoming a crucial time in crypto for first impressions to make a statement, and with some of the most impressive tech and fundamentals in crypto, it’s surely time for NKN to ascend from a diamond in the rough.

Minimum stake for non-consensus nodes is a great idea.

Upon releasing in December last year that you had the NKN Client pushed out to over 35,000 NAS devices with a particular vendor, you had mentioned talking to 2 others at the same time I believe. Did this ever develop further? And if not, is this still a market actively being targeted?

In the past few days, most of the population of Belarus has been without Internet due to blockades by the state. Almost all known popular VPN services, such as TunnelBear, Nord VPN, HotspotShield, Hola, etc., have also been blocked. The only thing that allowed to restore at least some access were custom shadowsocks servers, or tools such as Psiphon (which received 2 million downloads from Belarusian users in just two days). This is an example of how the application really performs its tasks and becomes popular in a very short time. Unfortunately, n-mobile did not work in those days (I think, due to the fact that most nodes are located on popular VPS, such as Digital Ocean, AWS, Google, etc., and they are, of course, blocked in such situations). Question: Wouldn’t it be interesting for the team to develop not only towards privacy, but also towards accessibility, perhaps with the help of some additional tools, like special layers of proxy, because the potential for using such applications is really great, and most importantly, such applications are in demand in critical situations?