Imagine you are Captain Narwhal of the Millenium Falcon starship, and need to go from Earth to Endor. You have two choices:

Luckily, you also have these two choices when using NKN to send data from one client to another client. In the next two chapters, we will delve into the details of how they work, how they differ, and how they can best serve different types of applications over the NKN Network. 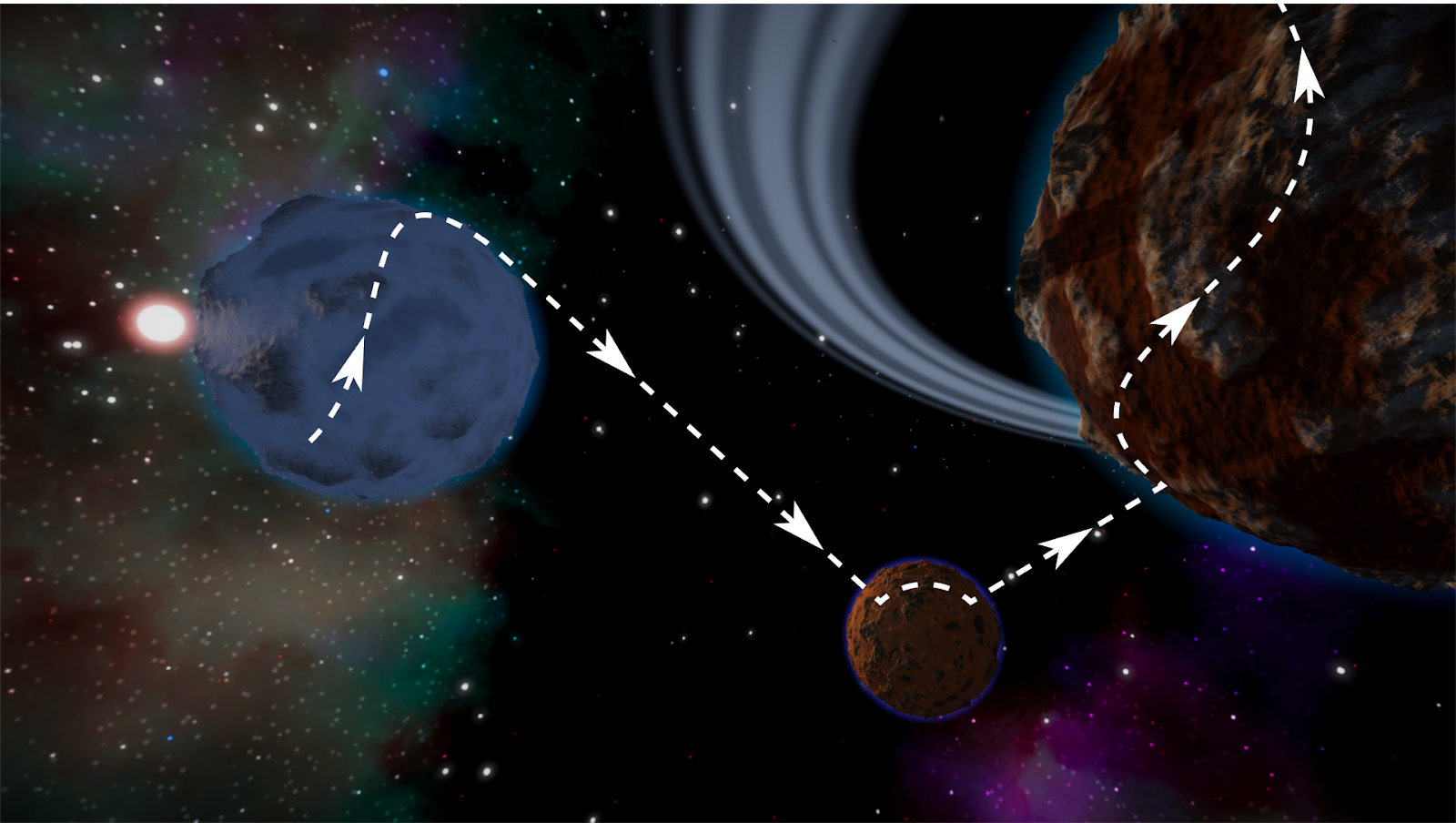 The “normal” way to route packets through NKN Network is using NKN’s significantly improved Chord Distributed Hash Table (DHT) algorithms. Chord DHT is secure and verifiable, meaning the choice of neighbors and route is verifiable given all the nodes addressed on the ring. The routing works such that:

A more detailed description of the algorithm can be found in “Stephen Wolfram (Creator of NKS) Tries to Understand NKN”:

[image] Introduction NKN recently announced Stephen Wolfram - founder and CEO of Wolfram Research; author of A New Kind of Science (NKS); creator of Mathematica, Wolfram|Alpha, and the Wolfram Language - joined NKN as an advisor. Given Stephen’s pioneering discoveries using cellular automata , it was a natural fit that he become involved with NKN. We recently met with Stephen to explain exactly how NKN works and what makes it different than other blockchain applications. In this lightly edi… 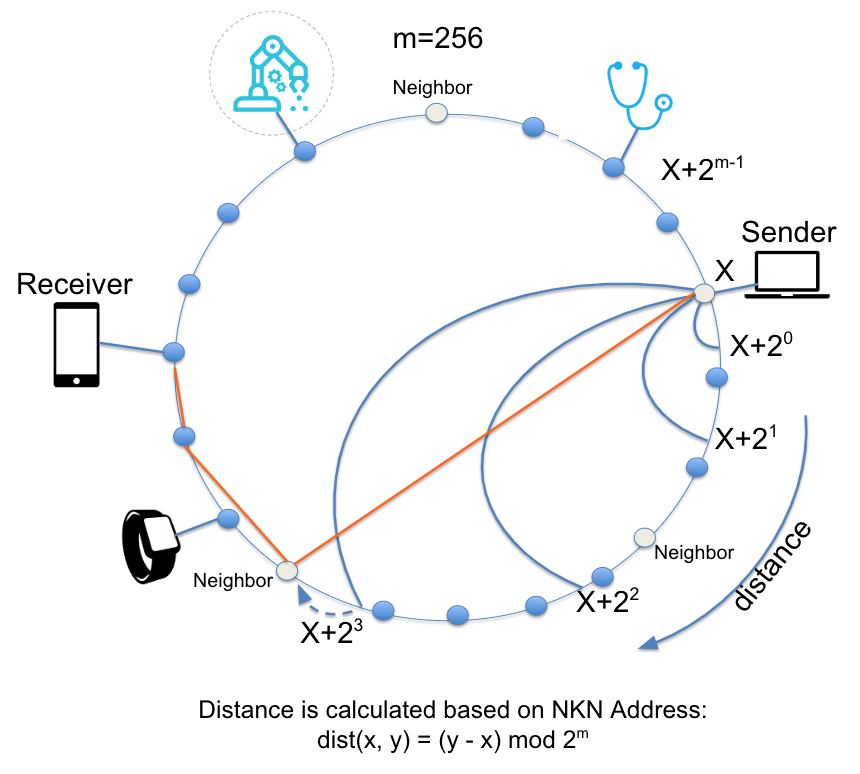 In some cases, this mode of routing will add more hops and potentially more latency compared to the default route a packet will travel without NKN. There is a tradeoff between efficiency and security. The reason is that NKN’s mining reward is based on Proof of Relay, or how much data a node relays for the network. So in order to prevent collusion attacks, it is critical that nodes cannot manipulate neighbors nor routing.

But we have made two enhancements to the original Chord DHT algorithm to improve its efficiency without sacrificing the security and verifiability. 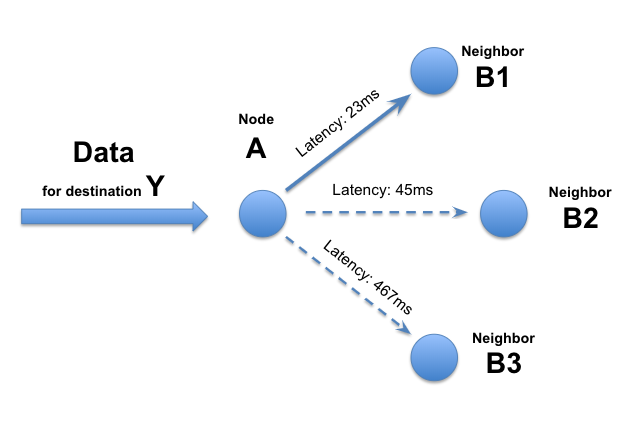 We have found that the default route in today’s Internet is far from optimal. By selecting the lowest NKN Latency route, we can often improve the end user’s Internet experience. But there is more.

We can also combine multiple NKN routes for not only better latency, but also higher aggregated bandwidth. One good use case is large file transfer based on http/https and range request. The following diagram illustrates the concept of combining 3 NKN paths, but in reality our multi-client SDK supports any number of concurrent NKN routing paths. When one utilizes multiple concurrent path, he can either choose to minimize latency by sending more redundant data using different paths (e.g. nkn-multiclient: https://github.com/nknorg/nkn-multiclient-js), or choose to maximize throughput by sending different pieces of data using different paths (e.g. nkn-file-transfer: https://github.com/nknorg/nkn-file-transfer).

And the test results show significant improvements. In late 2018 we did a prototype of a web accelerator and achieved a 167% - 273% speed boost by using multi-path over our testnet. And the bigger the file, the better the boost. 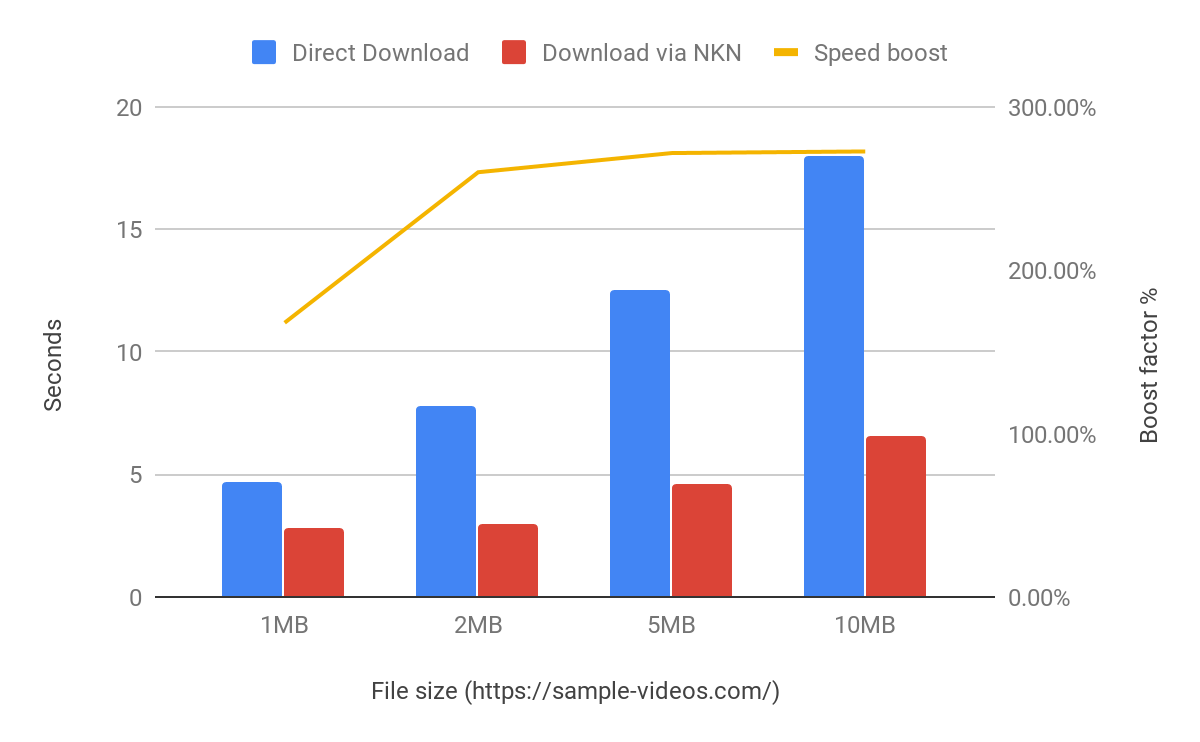 In August 2019, a recent test of large file transfers over NKN mainnet using nkn-file-transfer (https://github.com/nknorg/nkn-file-transfer) shows we are 460% the speed of WeChat and 160% of QQ. We used 8 concurrent (randomized and secure) paths over NKN Mainnet, between PC clients in China and in California. 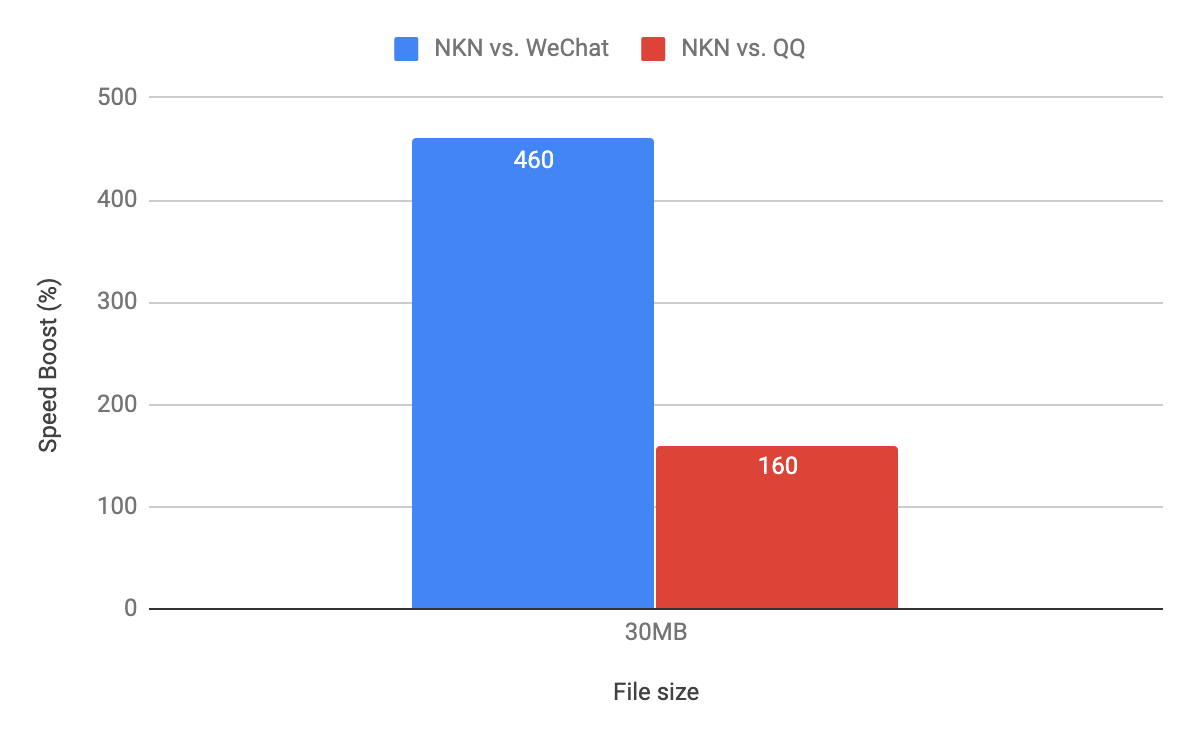 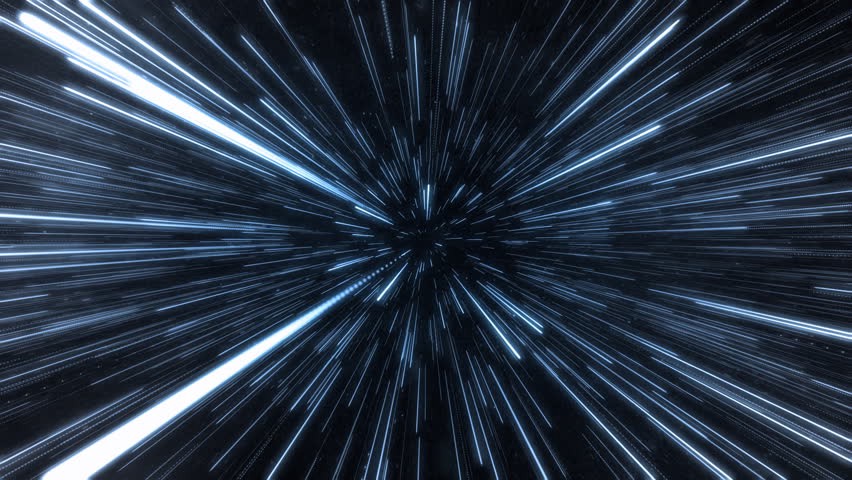 But what if you want an even faster experience? As fast as a Hyperspace jump? And willing to pay gas for it?

Yes you definitely can with the NKN network,but with a different mode of operation as illustrated in the examples below. This mode is specifically designed for applications that require the most direct and fastest service possible. The key is to connect to a single NKN Node which offers a direct route to the destination. In this case, the client pays the node directly as the traffic does not go through NKN’s consensus and therefore does not have the opportunity to earn mining rewards for the traffic.

TUNA, short for Tunnel Using NKN for any Application, is a platform built on top of NKN that allows everyone to turn any network based application into a service and monetize it based on usage. Some concrete examples are:

In order to fulfill the high bandwidth and low latency requirements of these applications, the client only needs to connect to the NKN TUNA server where such services are hosted. The TUNA client pays via NKN to the TUNA node, based on the usage of certain services. In this case, we do not go through the randomized routing of NKN’s “Normal mode” at all! So we can support services similar to the likes of the upcoming Google Stadia game streaming service. 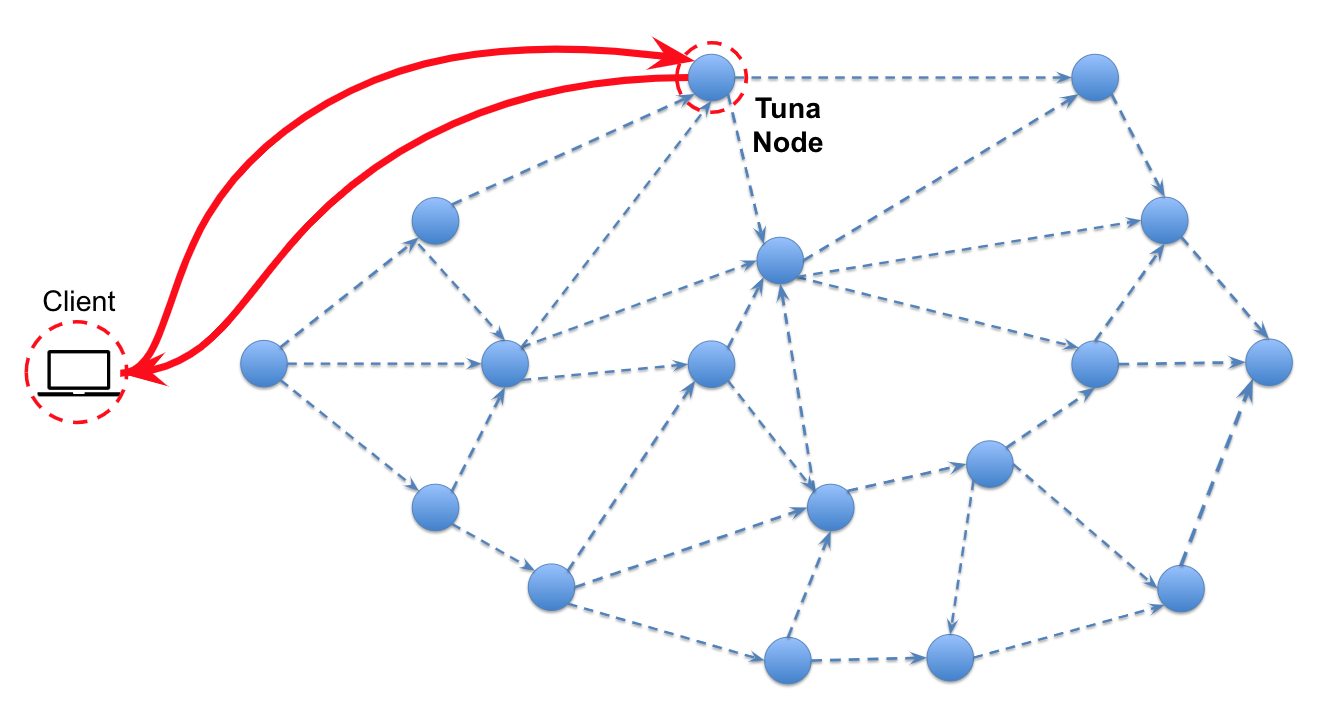 If we dive one level deeper, you can see that TUNA acts as a multiplexer between many different applications to utilize the same tunnel between the client and the NKN TUNA node. So all the client side applications talk to the server side as if both are residing on the same computer. No modification to the applications at all, which is the beauty and main attraction of TUNA solution. 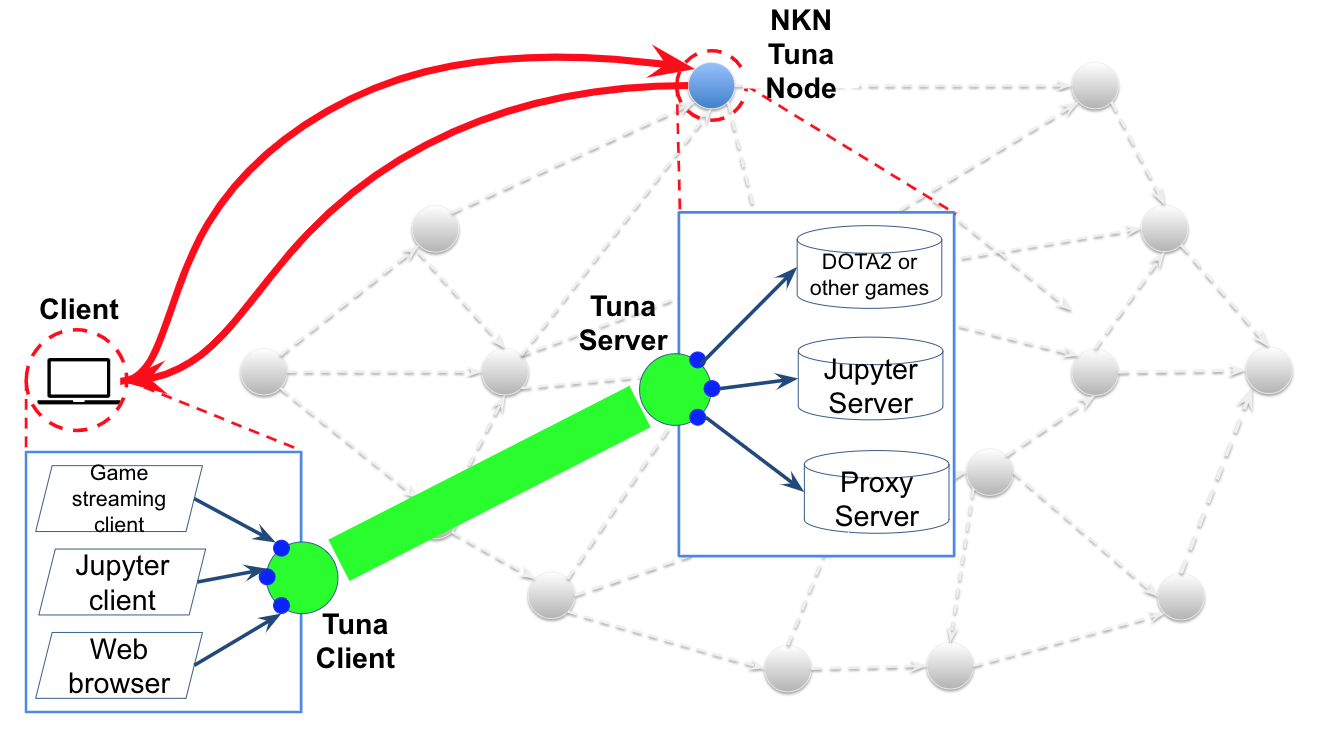 So Captain Narwhal’s choices are clear depending on the type of application you are using over NKN’s network., A simple side-by-side comparison is provided below:

Captain Narwhal, may the force be with you and happy sailing across the vast NKN universe! 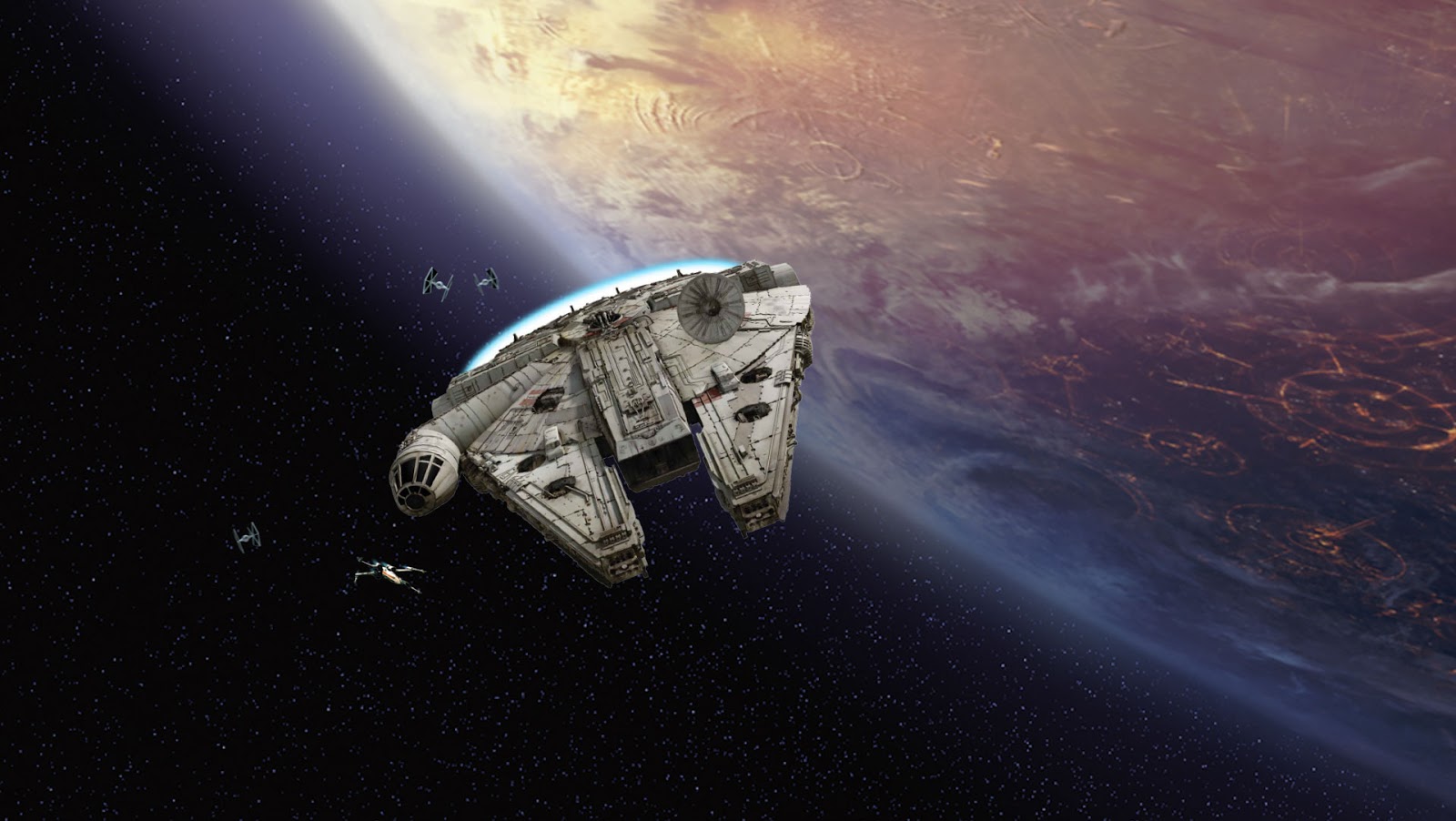 Amazing read! Packed full of information and easy to swallow at the same time.

A must read for anyone interested in the internet of the future.